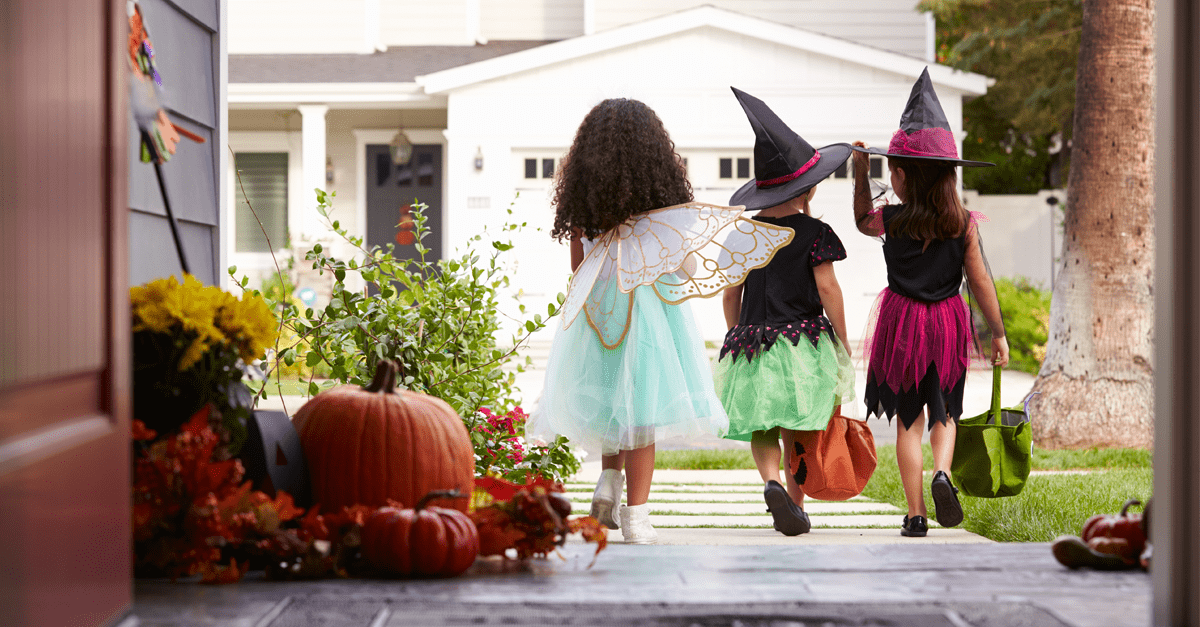 Halloween is pretty much every kid’s favourite holiday. But, when you think of this day, there’s a lot more to it than just trick or treating. So much so, that we’ve considered writing a post about the different Halloween traditions around the world very necessary.

So there we go, how’s Halloween celebrated around the world?

Halloween in Ireland: Where It All Began

Halloween originated in Ireland. And how do the Irish celebrate it? People light bonfires, children wear costumes and spend the evening trick-or-treating (sounds familiar, right?). When trick-or-treating time is over, people gather to celebrate together, have food and play games.

For example, a very traditional Irish game consists of hiding sweets and coins under cards so when a child picks one they get what was underneath. They also play “snap-apple”, which consists of hanging an apple on a string, tying it to a tree or doorframe and trying to bite it without using your hands. They also do treasure hunts where sweets are usually the prize.

Kids also love to play this not-at-all-annoying game that consists of knocking on their neighbours door and running away before they open the door. They call it “knock-a-dolly”.

In Ireland, people usually eat barnbrack (or barmbrack), a fruitcake that people usually bake themselves but can also be bought in stores –find the recipe for barnbrack here –. The most curious thing about this cake is that a treat is baked inside, and it tells its eater’s future. How? Each item means something different:

Both results are positive, so no need to worry about what you’re going to get!

Halloween is however not celebrated everywhere –or at least not until recently –. In Spain, Mexico and Latin America, people celebrate “Todos los Santos” (All Saints’ Day) and “el Día de los Muertos” (All Souls’ Day). On these days (1st and 2nd November), people honour the dead by visiting, cleaning and decorating with flowers the graves of their gone relatives.

In Spain (and in other European countries), young people do celebrate Halloween now. They dress up and go to house-parties, bars and clubs. Trick-or-treating is not common, though. And the only pumpkins you’re likely to see are the ones you can find in Starbucks’ Pumpkin Spice Latte.

On 5th November, people light bonfires all across England. This celebration has little to do with Halloween or Samhain. Most English people don’t celebrate Halloween since the Protestant Reformation began to spread.

So what is Fawkes Day about? Guy Fawkes was a member of a Catholic group who wanted to remove King James from power (King James was a protestant, just in case you were wondering). On 5th November 1606, Guy Fawkes was executed for attempting to blow up England’s parliament building.

There is however a tradition that slightly resembles trick-or-treating. On this day, kids walk the streets carrying a guy and ask for “a penny for the guy”. Needless to say that they keep the money (which is more than a penny) for themselves.

On Halloween, Chinese families leave food and water in front of photos of dead relatives. They also light bonfires and lanters to light the paths of the spirits who wander the streets on Halloween night.

Buddhists, however, make paper boats and burn them in the evening. With this, they aim to remember and honour the dead and to free the spirits who never were buried.

There are many different traditions going on across Europe, so we’ll try to enumerate the most original ones!

So tell us, how do you celebrate Halloween? Do you know any tradition that we haven’t mentioned here? We’d love to hear about it! Let us know in the comments or on our Facebook and Twitter profiles!

And if you’ve enjoyed this post, check out the rest of our blog!

Thanksgiving: Origin and Traditions Across the US

Pacifier: Yes? No? Until When? Find Out!